The home for SCOS 2015 is Nottingham Business School at Nottingham Trent University, located  at the city campus in the heart of Nottingham. Nottingham is a large city located in the English Midlands, 175km north of London, with a population numbering over 700,000.

Nottingham, and nearby Sherwood Forest, are most closely associated with the legend of Robin Hood, and indeed this mythical outlaw will be the subject of a special symposium within the conference.

The Trip to Jerusalem Inn

A further legacy of Nottingham’s medieval era is three pubs which each claim to be the oldest in England, including the Trip to Jerusalem, whose rooms are carved into the sandstone rocks upon which sits Nottingham Castle, and which below the ground form an extensive cave network.

Nottingham’s industrial history is associated with textiles, and the city is particularly known for its lacemaking industry, which saw the city linked with two historical worker movements of note. The framework knitters cottage industry played a role in the development of worker co-operatives and, as textile work became increasingly mechanised, Nottingham witnessed acts of framebreaking as part of the Luddite movement. 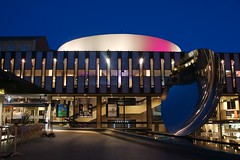 As a sporting city, Nottingham is home to the Trent Bridge international cricket ground, and to the world’s oldest professional football club, Notts County FC. Nottingham’s other club, Nottingham Forest, still celebrate the seasons of  1979 and 1980, when they won successive European championships. Individually, Nottingham boasts the talents of Olympic double-Gold medal winning swimmer Rebecca Adlington and super-middleweight boxing world champion Carl Froch, whilst the success of ice-dancing pair Torvill and Dean, with their Bolero routine at the 1984 Winter Olympics, remains a Nottingham legend to rival Robin Hood.

Post-industrial Nottingham is focussing on developing areas of industry including financial services, life sciences and low-carbon technologies. As host to the annual Game City event, Nottingham is also becoming a hub for small firms involved in computer gaming, digital media and software development – wholly appropriate as Nottingham is also the resting place of Ada Lovelace, daughter of Lord Byron, who is credited with writing the world’s first ever computer program.

Practical information about Nottingham, such as accommodation and how to get here, will be added to the site as the conference draws closer. In addition, blog posts will highlight particular aspects of Nottingham life and attractions, linking the home city to the conference theme of Home.